Festivals in the Nozawa Onsen Area 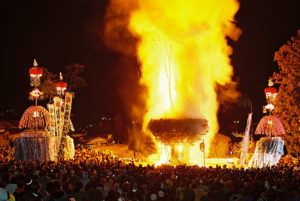 By far the most important festival in the region, and famous all over Japan is the Dosojin Matsuri, better known in English as the Nozawa Onsen Fire Festival.

This festival is held on January 15th each year, and involves fire, snow and alcohol, all in copious quantities.

Those in their early 40s must construct the 3 story wooden shrine called “shadan”. Under the direction of a local craftsman, they bring logs cut from local forests and assemble the shrine. When completed it is 10m high and 8m wide.

On the night of the 15th, the flame is lit by striking a flint, and then carried to the grounds where the “Shadan” is located. And it is used to light a massive bonfire

By this time, all the 42 year old’s of the village are sitting atop the “Shadan”, while the 25 year old’s are stationed below as defenders.

The attackers light torches from the bonfire and charge at the “Shadan” trying to set it on fire. The defenders must block and repel them. First the festival organizers try to break the cordon, followed by the children of the village.

The real action begins when the remaining men of the village hurl themselves at the “Shadan”, only to be physically blocked by the 25 year old defenders. It can become quite brutal.

Usually after about 90 minutes they succeed and and the “Shadan” catches fire, and burns through the night.

Another important aspect of the festival is to celebrate, and protect all the baby boys born in the village in the past 12 months. Massive banners fly all around the festival site, with the names of the new born on them. 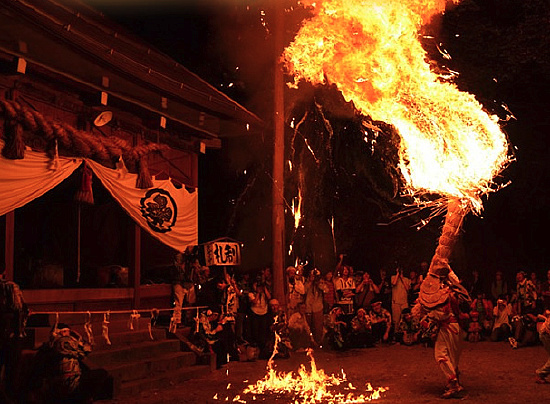 Held every year in early February, the Iiyama Snow Festival is one of the most popular in Nagano.

The festival is known for it’s large ice/snow sculptures and and Kamakura (Igloo) Village.

As with many winter festivals in the region, fire plays a large part in the festivities.

On the first night a local ritual called Narasawa Daitengu is preformed. This involves swinging a large fiery torch around in front of the crowd.

There is plenty of local cuisine on hand, mostly made to heat you up from the inside. 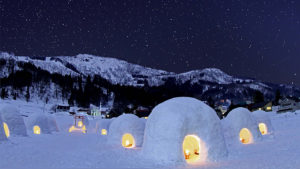 The igloo village is not actually part of the festival, but can be a great place to visit at the same time.

This festival is a great way to see who the Japanese maintain their traditions and show such warm hospitality.

If in Nozawa Onsen during this time, it is well worth grabbing a ride down to Iiyama, and taking part.