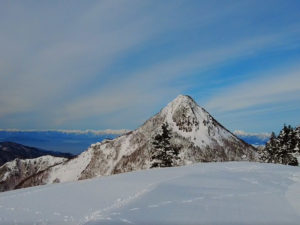 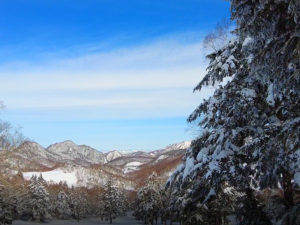 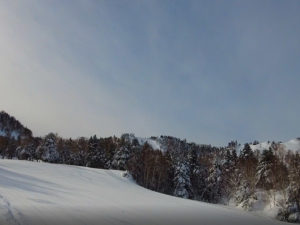 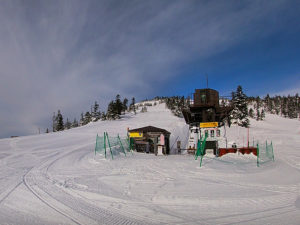 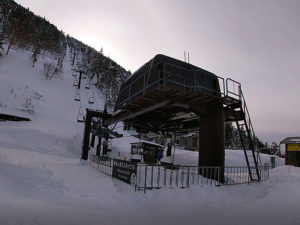 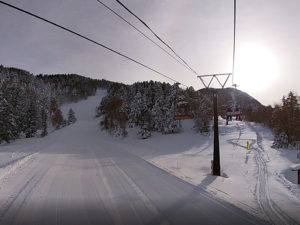 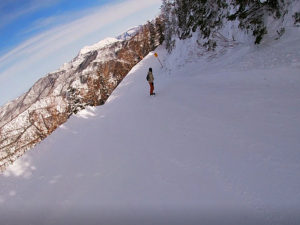 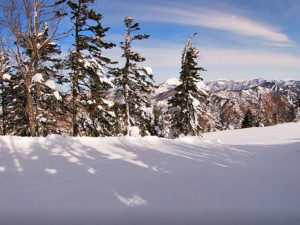 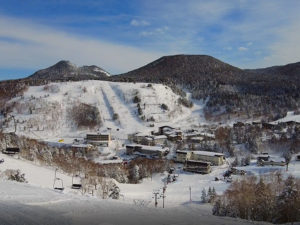 Yokoteyama and Kumanoyu are a separate area of Shiga Kogen, located about 20 minutes by bus from the Hasuike Junction. While there are a  number of hotels in this area, we recommend visiting as a day trip from other parts of Shiga Kogen. That being said, it is definitely worth the trip, even if just for the views alone.

This area is the highest part of Shiga Kogen, climbing to over 2,00m above sea level, one of the highest ski-able points in Japan.

Kumanoyu Ski Area was Skiers only (no snowboarders allowed) until a few years ago. It has 4 lifts that stretch horizontally. Several of the lifts have a mid station, so beginners can get off and only use the easier lower slopes. 3 of the lifts are quite slow, but the Quad is an excellent lift that is worth lapping over and over again. The upper areas are some quite challenging terrain, but none of the runs here is terrible long, so you can lap without getting tired.

Yokoteyama is mainly a vertical ski area, with the 3 sky lifts running one after the other up to the peak. Only the middle lift is a high speed lift, and the lowest lift is very slow. There are 2 other small areas off to the north of the area, but these only operate at peak periods. Sky 1 and Sky 2 are very much beginner terrain, while Sky 3 is much more advanced. The view from the top of Yokoteyama on a fine day are some of the best you’ll find on a ski resort.

Shibu Toge is over the back of Yokoteyama and only accessed by the Yokoteyama Sky Lifts. There is only 1 lift operating, and as the top is very flat, you need to scoot about 300m to get going.

Note. You can get to Yokoteyama from Kumanoyu via a course over the back of the Kumanoyu Quad, but you can’t get from Yokoteyama to Kumanoyu, except by walking through the car park at the bottom (a 10 minute walk)


Rates are in Japanese Yen and include all taxes