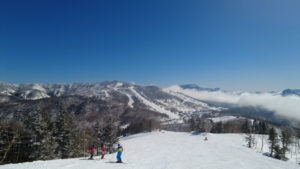 Shiga Kogen is Japan’s largest single ski resort, covering an immense amount of terrain. The main area of Shiga Kogen runs along a North – South axis, from the Sun Valley slopes through to Okushiga Kogen. This part of Shiga Kogen is all inter linked by lifts, but such is the scale, that traversing from one end to the other can take the best part of the day. There is also a separate area higher up to the West that includes the Yokoteyama and Kumanoyu ski areas.

Shiga Kogen is located in the Joshinetsu Kogen National Park, and is one of the highest resorts in Japan, with the base areas sitting at about 1,500 meters above sea level. Being so high, the snow quality is some of the best in Japan, and with climate change making some places a bit on and off, Shiga Kogen is a very safe bet for a ski vacation from Late December until Late March, even thought the season runs through to the first week of May.

Accommodation in Shiga Kogen is general larger scale than other resorts in the Nagano area, with many ski in – ski out hotels with over 50 rooms. The area does accommodate a lot of school groups, so get a room for a longer stay can be an issue, as the hotel may take booking for the entire hotel for several nights a week. There are more hotels that have stopped taking these types of bookings and are more focused on the inbound market.

While the on-slope side of your vacation will be fantastic, there is very little in the way of après ski entertainment, and very few places to eat out. This will change over the coming years as Shiga Kogen is currently seeing a large increase in international visitors and is moving towards services to cater for them.

Shiga Kogen is also the most remote resort in the Nagano Area, and only has a single access road. This road is quite steep and has a lot of curves. On occasion this road can be cut off by avalanches.

People looking at a map may get the impression that the Hasuike area, where the road forks, is the center of Shiga Kogen, however this is not the case. Most people will find the Ichinose area to be the most convenient as it does have a few bars and restaurants within walking distance.

Unless you are OK eating in at your hotel most nights, Shiga Kogen is often best done as part of a multi resort trip, and staying for 3 to 4 nights is ideal.